My first pregnancy was fairly uncomplicated in the beginning.

I experienced mild amounts of morning sickness but not much. By my second trimester, I was energetic and had that enviable glow that pregnant women are famous for.

This ease ended when I went into preterm labor at 27 weeks because I was working 12-hour days on my feet as a Personal Trainer. After spending two weeks in the hospital (at different times), I was released and put on strict bed rest. I was also prescribed a medicine called Nifedipine, a smooth muscle relaxer aimed at preventing my uterus from contracting. With the combination of bed rest and the medicine, I was able to ward off delivery for another 10 weeks.

Bed rest was one of the most difficult things I have ever had to endure.

I hate sitting still. I despise not being able to work out. I desperately wanted to be free from the confines of my home and enjoy the outside world. But my daughter’s well being was more important!

That being said, THE very day that I reached 37 weeks and was given the ok to be released from bed rest, going into labor became fair game. Now, I’m not proud to admit my level of eagerness to go into labor. But I’m sure that some of you, whether having experienced bed rest or not, can understand. On Saturday, March 28, I finally worked out. I mean really worked out. Jump squats, burpees, and all.

After waiting a few hours, I decided it was time to go to the hospital. Upon arrival, the doctor decided to watch me overnight to determine if my contractions were truly labor contractions. In hindsight, I wish I had waited until the next day to go in because at this point I was only in the early stages of labor. Luckily, by the next morning, I had dilated to almost 5 centimeters. The doctor decided to break my water to speed things up.

Not long after, I had my epidural put in. Admittedly, this was the scariest part of it all, but I was grateful that I didn’t have to feel the contractions. I initially asked for the smallest dose of medicine but ended up being what they called a “button pusher” because I kept pushing the IV button to administer more meds every time I felt a twinge of pain. (It’s not that I don’t have any pain tolerance, but I think my nerves got the best of me.)

Four hours after having my water broken, I had dilated to 10 centimeters and was ready to push. I had been in fairly good spirits up until this point.

When I suddenly realized that it was time, I got scared.

I was about to enter the motherhood journey as a young, single mom, and it was in that moment that the gravity of that situation began to settle in.

Although my family had been in and out of the room during the hours preceding, only my mom remained for the birth. I am so glad she was there. In the past when I had imagined delivering my first child, I had pictured holding tightly to my husband’s hand and sharing the experience together. That wasn’t the case with my daughter. Instead, my mom stood by my side to welcome this new life.

I have never felt more empowered than I did in that moment—not needing my daughter’s birth father to hold my hand.

After eight minutes of pushing, my daughter was born. There are no words that can accurately express the joy, excitement, and love I felt as soon as I laid eyes on her for the first time. It was remarkable and sincerely the best moment of my life thus far.

I am now pregnant with my second and awaiting her arrival any day now. I am married now, and I know that this experience will be different, but nonetheless meaningful. 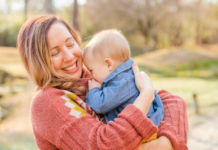 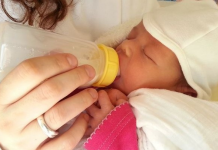